You can get more information fromgithub.com.
and you can ask questions for anwsers at http://bbs.behaviac.com/

Many programmers are familiar with Finite State Machine. State machine technology has become mature and popular among video game developments. It reflects the change of input from the start of the system to the current.

Different states may decide an object’s different properties and behaviors. .
The following picture shows finite state machine that maintains a graph. All nodes in the graph are states. A line between nodes is state transition that is according to the execution of certain rules between states. Logic in any nodes can be described as:

The finite state machine has advantages. For some simple AI, it is more convenient to use state machine. But when it comes to some complex AI, the logic would be complicated and overloaded. Also, when there is a need to expand the current behavior logic, coding would be difficult. Because the number of states that are required to be maintained increases manifold.

Behavior Tree makes the process of achieving AI requiring more skill. Framework designers comprehensively consider all possible situations and make every situation a type of abstract node. What game developers need to do is to connect all the nodes according to the rules to make a Behavior Tree that is required. Hence, the Behavior Tree would have more object-oriented properties.

On the concept, Behavior Tree is a script that is showed to users in the form of a tree. The execution result of a node is managed by its parent node to decide what to do next. Since there is no more transition between nodes, they wouldn’t be called state, nodes are only behaviors. The execution of a Behavior Tree

Meta is the core of behaviac, it contains information of Agent type, property, method, etc. Agent is in charge of executions of Behavior Trees in games. Every Agent contains its data or the action to execute itself; this data is called Property and this action is called Method. Meta is the description of an Agent. It contains its property and method.

The picture below shows by opening the Meta browser that is in the Designer, users can view or create Agent type. After selecting one Agent type, users can view its information such as property, methods and expand Agent type’s members’ properties, methods, etc. 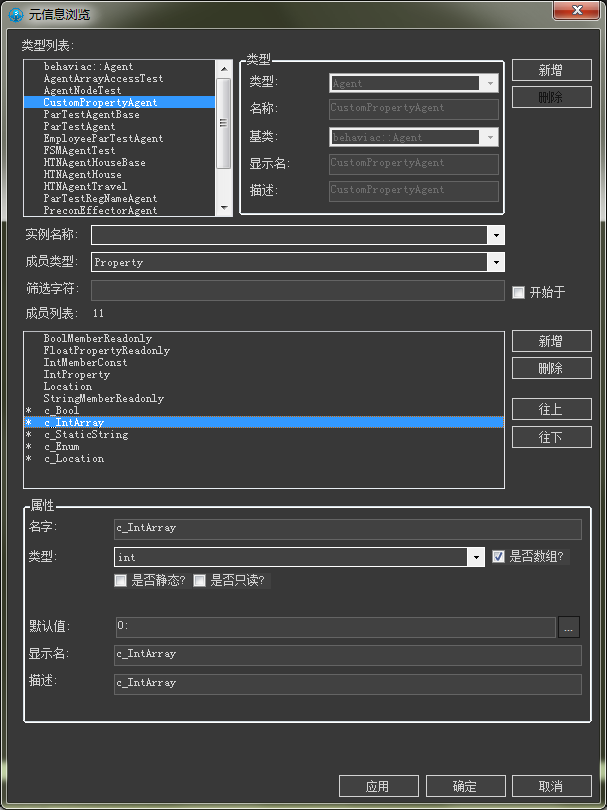 Data Type is divided into Agent, Enumeration：Enumeration and Structure. 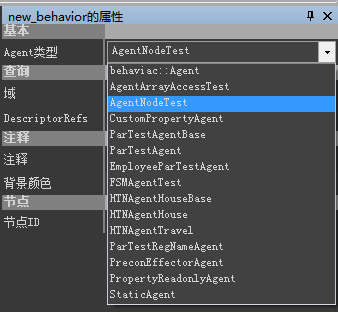 All Agent type’s instances in the Runtime end are required to pass register and be exported to Meta files. So the Designer can get the instance list and list all the instances for users to choose. Please refer to the user manual for the register method. 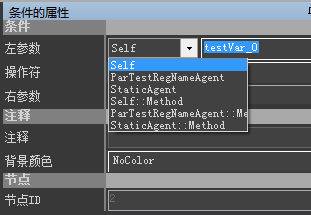 behaviac supports Read-only variables. So the Variable can only be read in the Designer. Local variable does not only support basic data type like int, float, bool, but it also supports complicated pointer type or reference type. 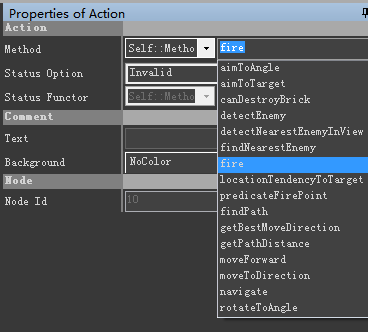 To begin to use behaviac, at first users need to create a Workspace in the Designer.
Files in Workspace have .workspace.xml as their extension names. They are in charge of managing the configure file of all Behavior Trees in game projects. 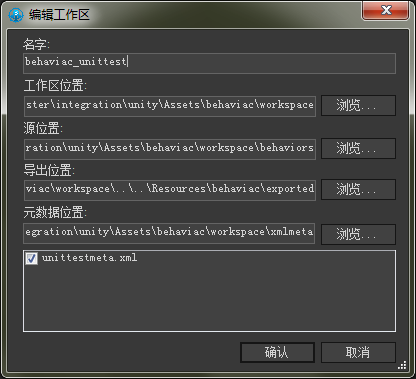 behaviac provides a lot of nodes and attachments with various functions. It also supports expanding the types of nodes that it requires. Moreover, behaviac support advance usage like sub tree, event, Prefab.

Behavior Tree’s nodes can be divided into 5 major categories: Action, Condition, Composite, modify, attachment. Picture below shows, Action nodes and Condition nodes are leaf nodes. Composite nodes and modifier nodes are branch nodes. Attachment has to be attached to these four nodes and cannot be existed independently. 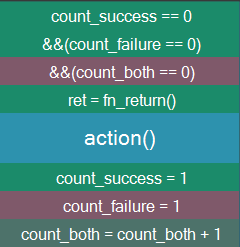 Event is the special attachment that makes one Behavior Tree as another Behavior Tree’s node (usually as the root node). It is used to switch Behavior Tree when respond event happens. 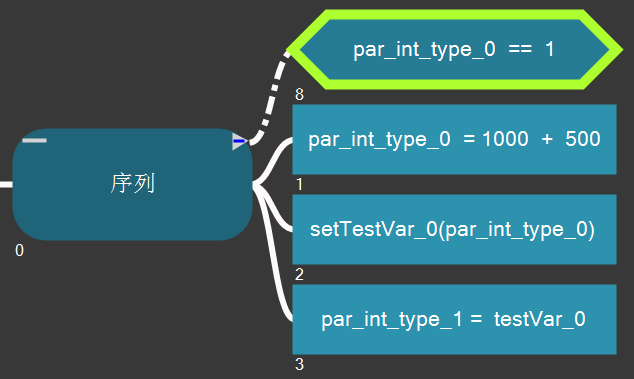 In Designer users can use mouse to drag these nodes into the newly created Behavior Tree. Also to drag Preaction and Postaction attachments to the specific node. 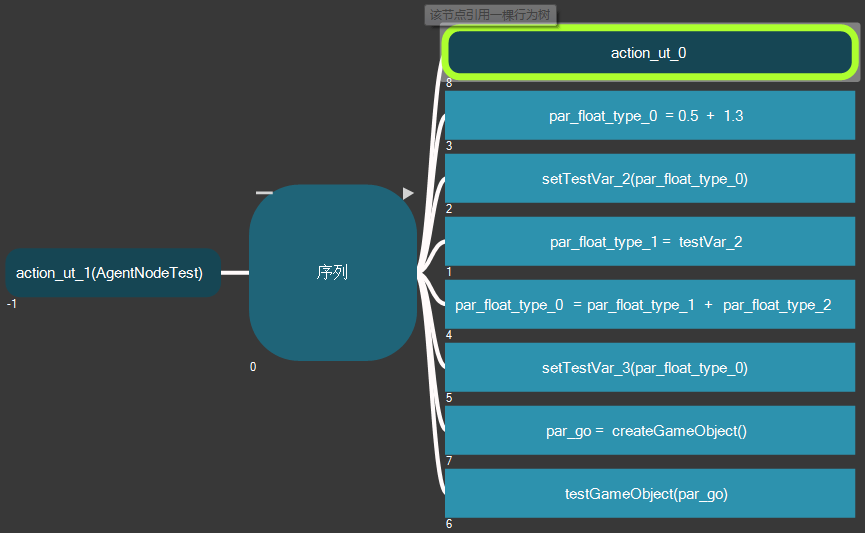 Beside sub tree function, behaviac also supports Recursion function. To use Recursion users need to make the current Behavior Tree as its own sub tree. Avoid create an endless loop by using Variable.

During the process of execution of a Behavior Tree when status and conditions are changed or Events happen, how to interrupt the current execution is an important question.

Currently, behaviac supports three ways to process when status and conditions are changed or Event happens: parallel nodes, SelectorMonitor nodes and Event attachment. Parallel nodes and SelectorMonitor nodes re-evaluate all the child nodes when the execution of a Behavior Tree happens. Unlike other nodes that keep the child nodes from the last execution for the next execution. Event attachment responds when Event happens to the game logic.

To use parallel nodes to process Event, users need to express the Event in the format of a condition and monitor this condition. Quit if this condition is not satisfied. The concept of this method is vague. It is also complicated to use.

Event as an attachment is mainly used when the game logic sends out Event; after receiving the respond, it interrupts the current ongoing Behavior Tree and switch to another Behavior Tree that is set.

behaviac also supports traditional FSM. FSM is mainly constructed by State and Transition like in the picture below.

Similar to nodes in the Behavior Tree, users can add pre attachment and post attachment to FSM’s Status nodes. It means the pre-condition and the post operation that are required for the current Status node when it is executed. 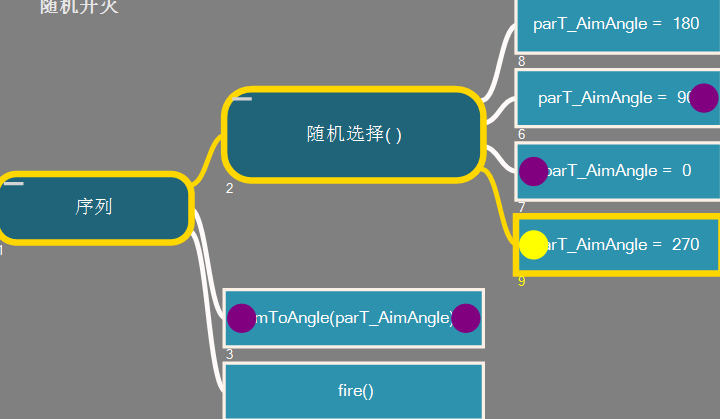 behaviac also supports offline debugging, the execution information can be saved and dumpped to a file and loaded later.

behaviac provides unit test and game Demo in both C++ and C#. Can enter through menu-item: ‘help’ -> ‘control explanation’ in Designer. Then click to open the unit test or game demo’s workspace that is required like in the picture below